With Cypress, you can write E2E tests with a well-developed tooling. Cypress does not need browser drivers like Selenium, because the code is executed directly as Javascript in the browser. Therefore, the installation is quite short and no periodic updates of the drivers are needed.

With Cypress, you can write E2E tests with a well-developed tooling.
Cypress does not need browser drivers like Selenium, because the code is executed directly as Javascript in the browser. Therefore, the installation is quite short and no periodic updates of the drivers are needed.
The Cypress CLI comes with a handy Electron UI to simplify debugging with DOM snapshots and pretty log output.
In addition to the normal features like screenshots, Cypress can also record videos of the tests performed by default.
This article is about getting started with Cypress together with Angular. The same setup could be done with other frontend technologies as well.

We start by setting up a new Angular app with the flag --defaults:

Then we install the Cypress tooling. Cypress will download the Electron app during the installation.

To scaffold all necessary folders and files we can start Cypress the first time.
With the following command we bring up the Electron Cypress UI:

Alternatively, you can add a script entry to your package.json file to start the same command with npm run cypress:open to avoid having to write the path every time:

As previously mentioned, Cypress has created the required folder structure {project_folder}/cypress . In our case the Angular workplace is our project_folder.
In the cypress folder you will find the folders integration, fixtures, plugins and support. 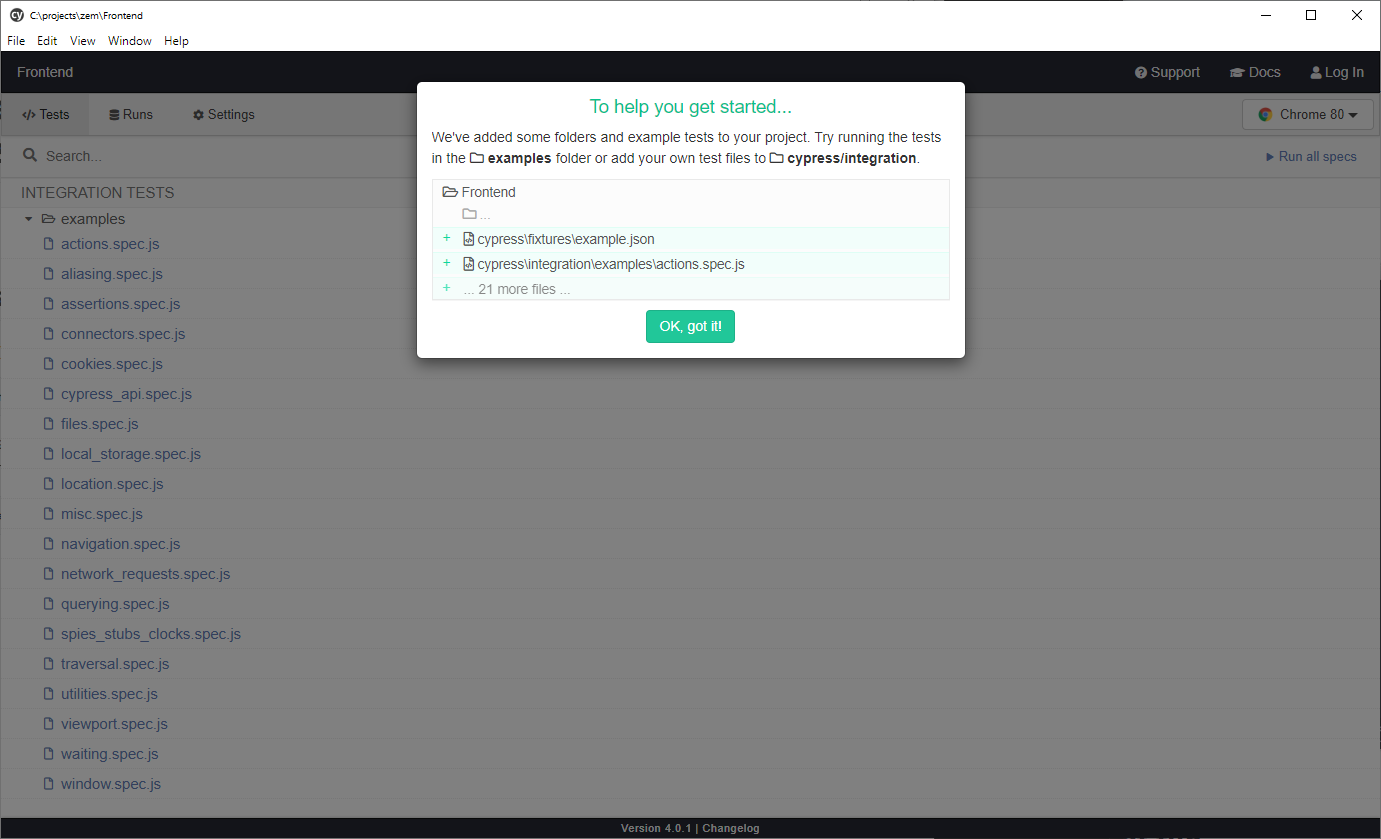 As soon as we get the necessary folders, we are able to install the required TypeScript types and a plugin for Cypress to integrate TypeScript.

Attention: The installation of the TypeScript plugin fails if you install the plugin together with Cypress.
The plugin requires the Cypress folder structure.

By installing the TypeScript plugin for Cypress the appropriate tsconfig.json file is created in the ./cypress folder.
Please check that it looks like the following piece of code to get the best possible integration:

As a next step we will create a folder under ./cypress/integration/mymodule and in there a first file to write a test, in my case: sample_spec.ts. Fill in the following code into this file:

Let's check if this first test works against the previously generated Angular app.
Open a second terminal and start the app with ng start and Cypress with ng run cypress:open. Cypress list your created spec-file and click on it to start the test. Seconds later this test should be green and look like this: 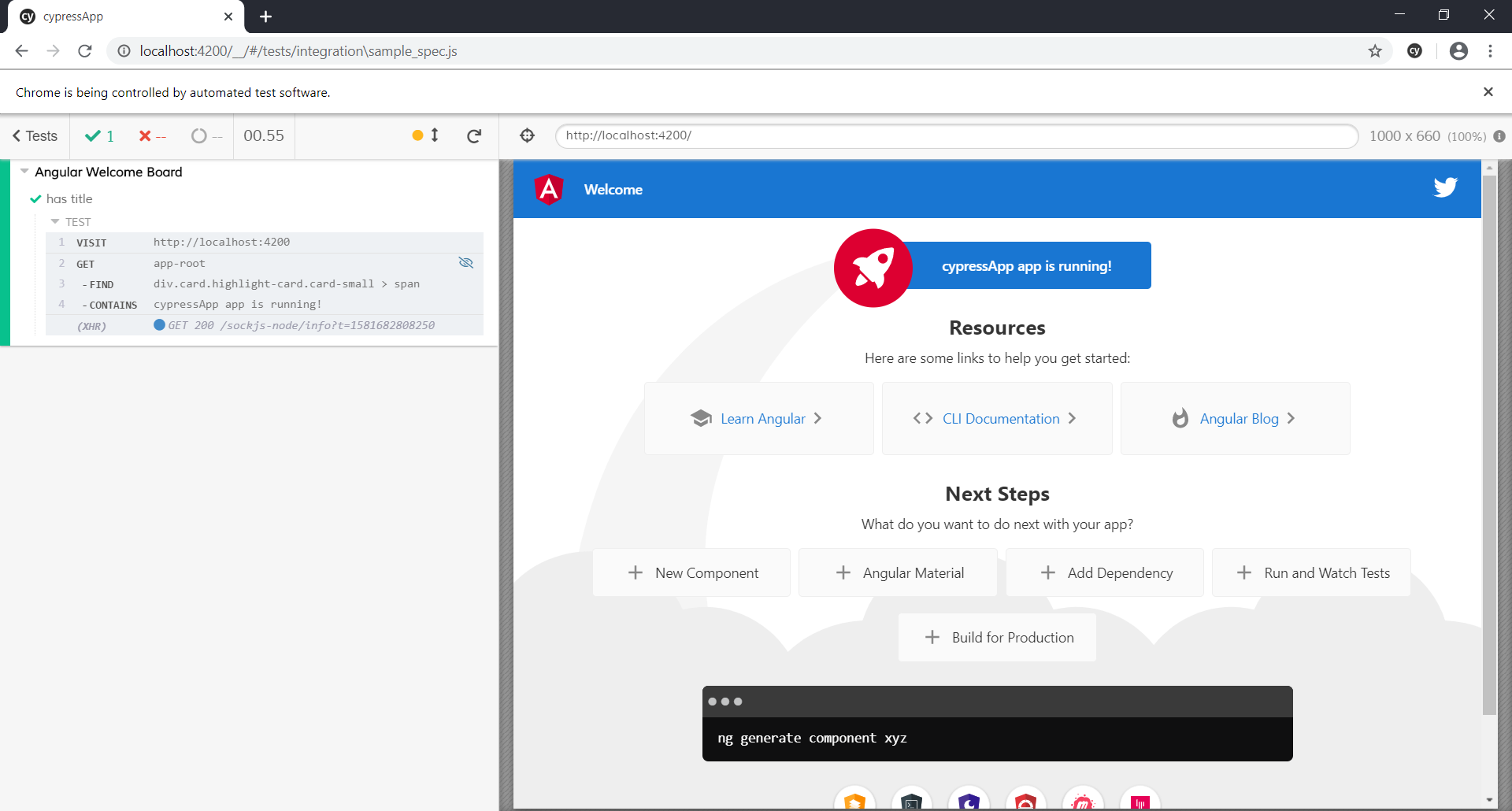 The first simple test works without problems, but when we take a look at the code, we see that we have added a cy.visit.
If we now have several tests that all call cy.visit and e.g. call a login in a more complicated setup, this is not nice enough and should be outsourced. Cypress stores these commands in the cypress/support folder.
There is already a pre-generated command.js file, which we will rename command.ts and copy the following code. Afterwards you have to reload the Electron app by clicking the Retry Button and may to restart your test.

We define a new namespace to extend the Cypress commands by our own written commands.
Additionally, we will type our existing methods, Here I added some comments and optional parameters for the open method.

Then remove the cy.visit() command in your spec file and add the following line at the beginning of your test:

As soon as you saved your code, Cypress will run the test again and it should still be green.
We copied an other helper function before, so let's use it in another test case.

Directly after saving this file, you should be able to see that this test is now listed and is green.
Now it is time to get to know another nice feature of Cypress - DOM Snapshots. 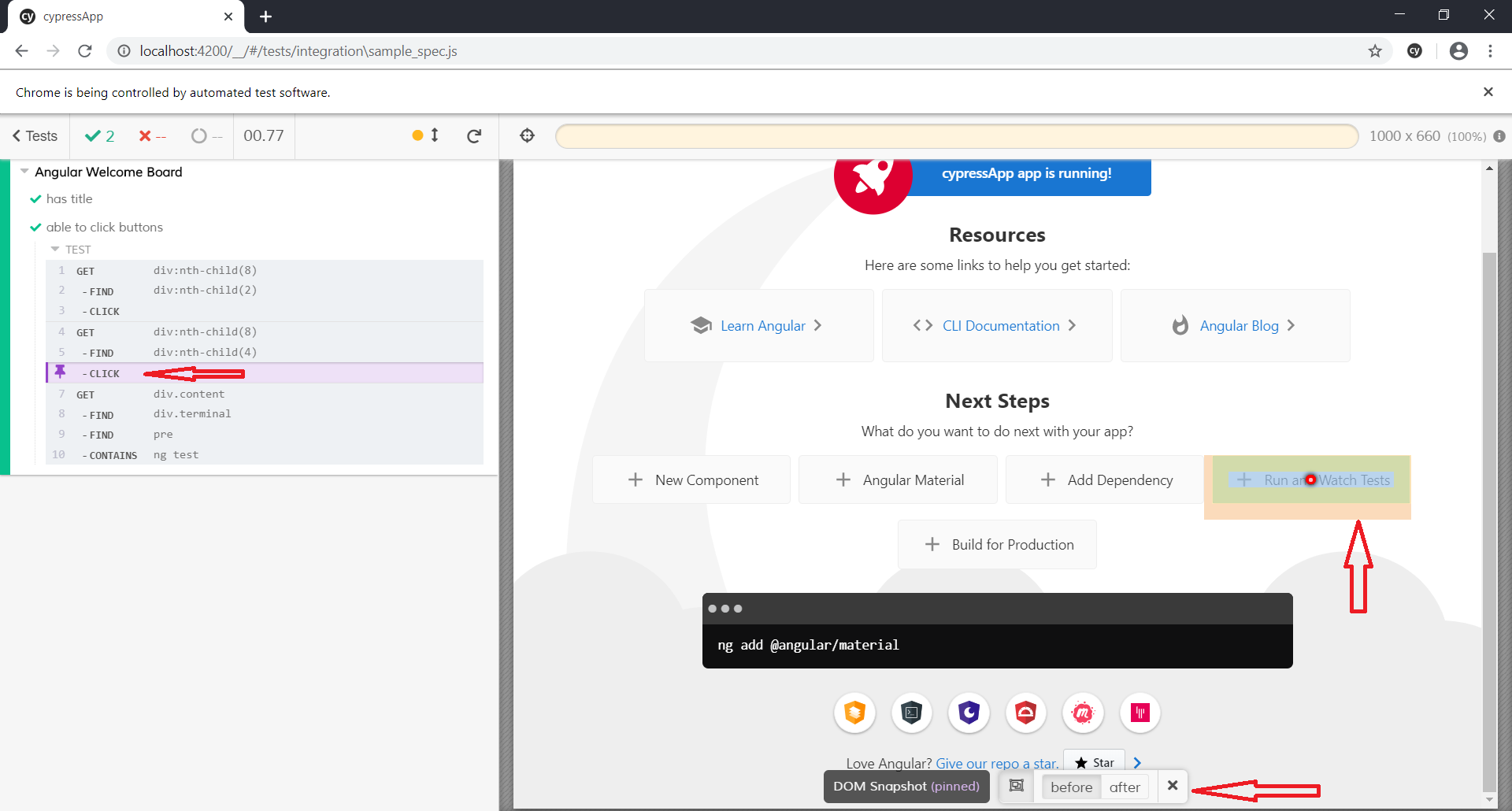 Cypress creates a Dom Snapshot for every command and allows you to see the hitbox and the state before the event and after.
If you need to debug further, you can open the browser [F12] to get a more detailed view of what happened.

To run the Cypress tests in a CI/CD environment, an Electron (headed) UI is not the most elegant solution, as it requires additional dependencies, such as an X server or other.
Cypress has an other command than open to run the tests in a headless Electron environment.
Let's configure this command in our package.json:

If you want to test cross browser or just not with the Electron environment, you can add the flags --browser chrome --headless to use any installed Browser.

When you now run npm run cypress:ci you will see that Cypress is recording per default a video of your browser.
Should you have a limited disk-space and you may set the property to false.

To configure this behaviour you can use CLI flags or a config file. During the installation, cypress already created an empty cypress.json file in your project root.
Copy the following snippet to this config file and add -C cypress.json to your cypress:run command in the package.json.

The video attribute configures the mp4 creation after every executed testcase and via the ignoreTestFiles you can control which files will be executed during a test run, so exclude e.g the example test files.

The report after the command npm run cypress:run will then look like this: 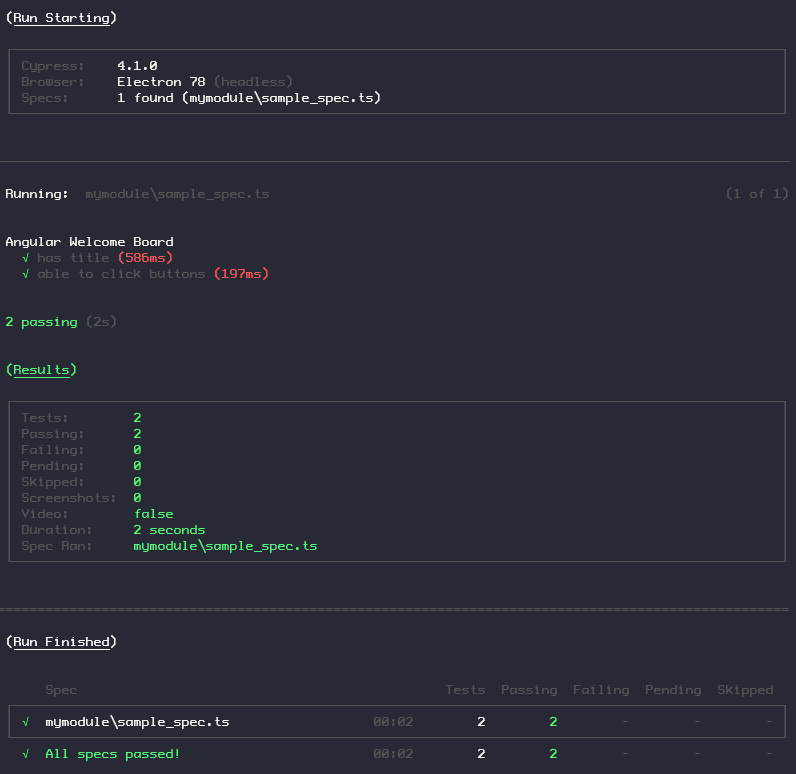 It is very easy and fast to set up tests with Cypress E2E, which is ready to run on most common operating systems. If your system is behind an enterprise proxy, the setup may be problematic because Cypress can't automatically load the required binaries.

But why should we use Cypress for Angular projects instead of the standard solution Protractor? With Protractor you still need a Selenium driver, which is downloaded during the npm installation. Protractor has less tooling and less debugging features than Cypress (i.e. Dom Snapshots or integrated Video recording) and you have to patch it simultaneously with the used browser.

The maintainability of the tests is on a comparable level depending on the available selectors. With Cypress it should be very easy to parallelize tests and execute them faster, because they are run directly in the browser with Javascript.